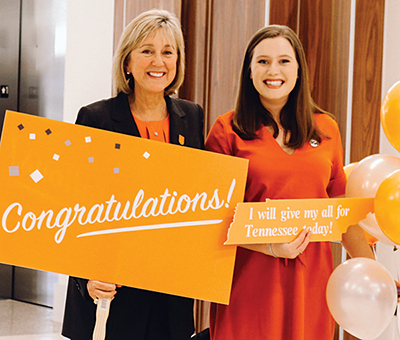 From a campaign as a Farragut Middle Schooler to stop the use of a derogatory term typically used to describe someone with mental disabilities, to helping lead the University of Tennessee’s Student Government Association as Student Body president — and so much in between — Campbell has been credited for serving with passion and humility.

Recognized for those qualities, Campbell was named the inaugural UT recipient of the George J. Mitchell Scholarship, conferred to only 12 students nationwide. This honor opens her path to study in Europe.

She also was one of only six recipients of this year’s UT Torchbearer Award, considered the highest achievable student honor for graduating seniors.

Campbell credits her parents, Joe and Jackie Campbell, for supporting her every step of the way — but she primarily credits the impact her younger sister, Olivia Campbell.

Olivia, two years younger than her sister, has Down syndrome.

“I could see up front the disparities in our social experiences,” Campbell said. “We had the same house, the same information — everything was the same, but people could see she had Down syndrome. I was given opportunities, but she was treated differently for no good reason other than the fact she had Down syndrome. So witnessing her social experience of having a disability has really struck me.

“There hasn’t been a lot of integration (academically) for her either,” she added. “I really think the educational setting brings more people together than it once did, but there are better academic models that need to be incorporated.”

The sisters have always been very close. Both girls attended Farragut schools, and were even classmates at FHS for a year. It was for her that Natalie was inspired to start the “Spread the Word to End the Word” campaign in middle school, encouraging students to understand the destructive impact of a specific slur.

While Olivia went through graduation last year, and since her freshman year has been a member of the FHS girls basketball team, it has never been lost on her older sister the inconsistencies between their experiences.

On the surface, that realization didn’t initially seem to impact Natalie’s plans for the future.

“People naturally assumed I might do something affiliated with special education because of Olivia, but that was not my plan,” Campbell said.

However, when she started college, several different experiences led her to consider the philosophy of disability, such as learning about the Socratic Method.

“It is about constantly questioning, and as I reflected on conversations I had with my parents, and with the experiences I had with Olivia, and I realized I wanted to help right those wrongs I had seen in the system.”

One way to do that could involve Campbell ultimately pursing a career in special education law, she said.

“Education is a local and a state issue,” she said, adding that in the United States, the northeast “is more notorious for inclusivity which allows for better individualization.”

It’s something she observed while participating in a Down syndrome program at Massachusetts General Hospital.

“I have also had the opportunity to analyze the law, to see what is defined as a free and appropriate public education,” Campbell said. “There needs to be a balance. We need to start at a place of full inclusivity, and modify away from that.

“The fact is that Olivia’s education experience, the good, the bad and the ugly, is why I am going into the field I’m going into,” she added. “One day, I want to show and provide a way for all of us to do better.”

Campbell’s Torchbearer award was announced earlier this year and presented by UT Chancellor Donde Plowman, who has served as a mentor for Campbell as they both assumed leadership roles at about the same time a little more than a year ago.

She graduated in May with a primary degree in disability studies.

Selected students earning this scholarship are sent to universities of their choosing in Ireland or Northern Ireland.

Campbell will be returning to Queen’s University Belfast, where she previous studied for a summer as a Fulbright Scholar.

There, she will be pursuing a master’s degree in inclusion and special education needs.