Survives fire — but search is on

Jones’ sentimental quilt, intact ‘like a gift from God’ after devastating house fire 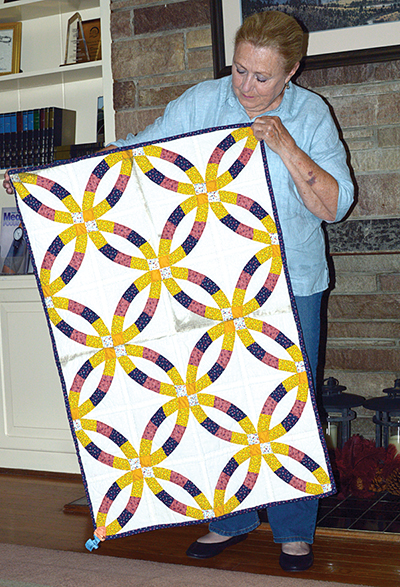 Delores “Sissy” Jones, 75, was elated when discovering her beloved “Double Wedding Ring” quilt and sham, handmade by her late mother, had survived a devastating house fire in Fox Den subdivision in October 2019.

Now she’s calling on the public to help her find the quilt.

After two months of waiting to go back inside her home, destroyed by an explosion on top of smoke and water damage, she discovered the quilt undamaged — not even dirty.

While Jones never cried — from the time of the fire until she re-entered what remained of her home — when she saw the quilt, she recalled, “That’s the only time I cried.

“I had come to the conclusion I had lost everything, and I hadn’t cried or anything,” she added. “I thought God’s got a plan for me. And then, when I found (her quilt), it was like gift from God. I was so happy.”

But after trusting a restoration company to remove the smoke odor, the quilt went missing. She only had one pillow sham returned.

With voice breaking, she said, “I’m just praying if it’s in somebody’s stuff that was delivered to them, that they realize it’s there.

“They’ve got one pillow sham and my mother’s quilt,” Jones added. “I would offer a reward; I wouldn’t ask any questions; I just want my quilt. “It’s all I got that I had.”

Losing most everything else in the fire, “(Even) our pictures are gone,” she said. “Now, not to have it, to know it’s somewhere … and it means nothing to anyone but me.

“I pray every day I’ll find it,” Jones added. “I think about it every night when I lay down.”

She remembered when her late mother, Barthena Robinette, made the quilt and shams in the 1980s.

“She worked on it for four years,” Jones said. “My mother was a single mother, worked at the cotton mill (24 years), and she lost her thimble finger in the mill.

While the front showed the double wedding ring design, the backing was a calico print, which also was part of the design on the front of the quilt.

“And, every piece comes to a point and matches,” Jones said. “She signed the quilt. I made her sign it. She was so proud of it.”

Ms. Robinette would visit Jones, making the trip from Kingsport to Farragut, and stay for a few days.

“Every time she’d come she’d bring part of it to be pieced or would be cutting it out to work on it,” Jones said.

It was made with the intention of giving the quilt to her daughter, who was 40 at the time.

“She just decided she wanted to make me something to keep,” Jones said. “And, she said, ‘One day, you might have a grandchild you’d like to pass this on to, something that I’ve made.’”

When she handed over the quilt, Ms. Robinette said to her daughter, “‘Here Gracie (Jones’ nickname) … I’m through. It’s yours. Take good care of it,’” she recalled.

That was the last quilt Jones’ mother made.