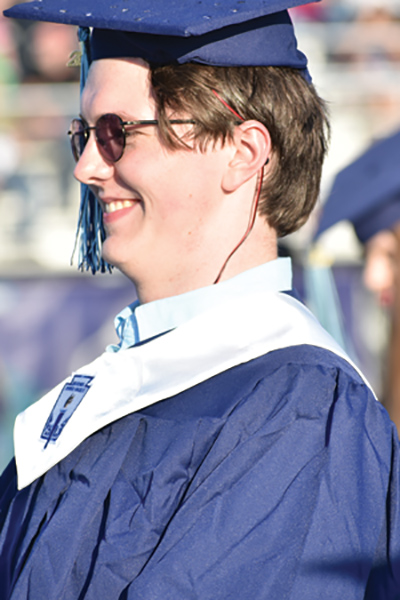 Despite an earlier threat of rain, Hardin Valley Academy graduated 485 seniors Monday evening, June 15, on a sunny and mild evening on the school’s football field.

A forewarned “protest” during the National Anthem was peaceful, with an estimated 100

students choosing to remain seated, or electing to kneel, in support of the Black Lives Matter movement.

Sierra Gerri Janaski was one of two commencement speakers, and was among those who elected to kneel.

She said in an interview Tuesday morning, June 16, the idea to peacefully protest originated with Class of 2020 valedictorian Victoria “Tori” Hart.

“We are members of the same club, The Progressive Hawks, and we have been organizing student activism for four years,” Janaski said. “While we did want to celebrate graduation, we felt really upset that a lot of people in our country are facing injustice and thought it wouldn’t be fair to forget about that.

“A lot of students have been killed by police and never made it to their graduation ...,” she added.

A moment of silence also was led by fellow graduate Kelton Gunn, “To pay respects to the lives lost, to the victims of social injustice and to those who were really affected by COVID-19,” he said.

In her commencement speech, Janaski said, “The future looks much more broken than was promised. No one remembers a time before 9-11. We were raised in an era of fear and high security. We were taught to be afraid of those who were different and be on guard.

“... The truth is, the world didn’t hand us the future on a silver platter, they handed it to us on a grenade,” Janaski added. “It’s literally about to blow up, and it’s our job to fix it. I know that we can, and we will.

The HVA Class of 2020 earned more than $14 million in scholarships.

Of the seven nominees for what executive principal Rob Speas described as “the school’s highest honor,” senior Lance Barnard won the 2020 Hawk Award.

Speas read the following from an unnamed teacher about Barnard: “I have never met another student … as mature, responsible and determined as he is. The summer before his senior year, due to family circumstances, he found himself homeless.

“He was taken in by another HVA family member, who gave him a place to stay for his senior year,” he further read.

“He has taken the situation in stride. He has faced many challenges, maintained obligations to clubs, organizations and extracurricular activities, maintained excellent grades and finished with over a 3.8 GPA. ...”