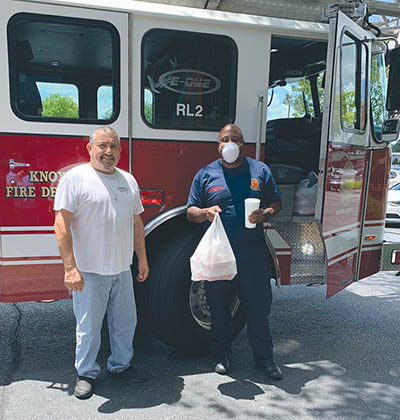 Farragut businessman Mike Baker made it a true “Thankful Thursday,” June 11, for area first responders, as he picked up the lunch and breakfast tabs for frontline workers who dined at Sami’s Cafe in Franklin Square.

He made the announcement in the days prior on Facebook, asking “any police officer, EMT, paramedic, ER nurse or doctor, firefighter or any other first responder” to dine in or carry out meals that day at the restaurant and “just let the owner know you saw (my) post.

Sami’s owner Sam Natour estimated about 20 first responders took Baker up on his generous offer by noon, while 24 dined throughout the day.

“We had a lot of police come in early for breakfast,” he said. “A lot of them are our regular customers, as are the firefighters from the fire station across the street.

“Mike is a good customer of mine,” he added. “I really appreciated him doing this, and I wanted to make sure everyone knows it was him.”

He said he had an office in Franklin Square from 2005 to 2011, and started frequenting Sami’s Café during that period.

“I not only wanted to thank the first responders, but I wanted to thank and help out Sam, too,” Baker said. “He’s a good friend of mine. His restaurant is normally packed, but with the COVID-19 restrictions, he is only able to seat and serve so many customers right now.

“He came to me and said he would like to try to do something for first responders, and I readily agreed,” Baker added. “I am tired of hearing people bad-mouthing the police. They are out there, day in and day out, and are people we oftentimes take for granted.

“They deserve our appreciation and to be thanked because they don’t get enough credit for what they do.”

Natour said, typically, most officers have their meals paid for at his establishments.

“Every time police officers come and eat with me, they never pay regardless because my customers always pay for their meals,” he said last week, noting 17 meals were covered Wednesday and Thursday by other diners.

“Regardless, it was great what Mike did,” Natour added. “He is a really great guy and always likes to help out.

“I really appreciate everything he has done.”