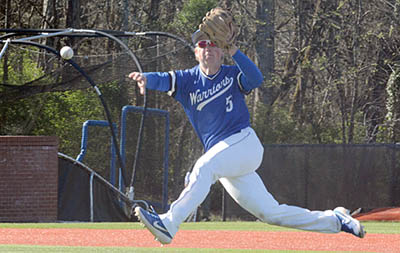 KNOXVILLE — Providing the eventual game-winning home run early, then closing the game as Christian Academy of Knoxville’s top reliever — not to mention his workout as Warriors catcher for six innings — senior Andrew Kribbs was quite a busy man Friday afternoon at CAK during the eight-team DeMarini Classic.

“Coming into pitch I’m already loose and warm (due to catching). I have that mentality to get ahead (in the count) early,” said Kribbs, closing things in the top of the seventh inning against Science Hill, allowing no hits and one walk with one strikeout, as CAK edged the Hilltoppers 2-1 April 2. The visitors’ record dropped to 8-4.

The Warriors (13-4) finished a perfect 5-0 during the Classic, which began Thursday, April 1, and ended Saturday, April 3.

Sophomore reliever Luke Jones worked the sixth inning, giving up one hit but otherwise retiring the side.

About his second-inning solo home run, Krebb said, “I believe it was a change-up, he left it up a little bit.”

A first-inning triple by Luke Harms, senior second-baseman, was followed with an RBI floyout by senior Ryan Degges to produce the other CAK run.

Seniors Owen Brooke and Grant Berrier had the other Warriors hits.