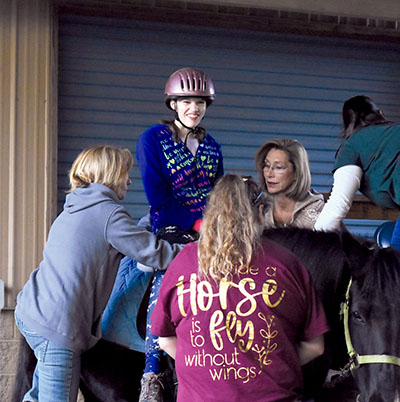 SouthEast Bank, headquartered in Farragut, recently made a sizable donation to Shangri-La Therapeutic Academy of Riding in Lenoir City, which will be used to refurbish its equine arena.

The financial institution officially donated $100,000 to the non-profit — which provides horse-related therapies for individuals with disabilities or other special challenges — on Feb. 10.

The 501(c)3 organization is in the midst of celebrating its 35th anniversary with a capital campaign it hopes will raise a total of $3.8 million to fund specific needs at both its Lenoir City facility and a second location in South Knoxville.

Executive director Lynn Petr launched STAR in 1987 as part of her master’s thesis project when she was a student at the University of Tennessee, and it has since grown into an operation serving nearly 250 students and veterans per year through therapeutic riding and other programs.

“It’s an honor to support STAR and their capital campaign,” said Bill Thompson, CEO of SouthEast Bank, which operates 14 branches throughout East and Middle Tennessee. “Lynn and the entire team are passionate about changing lives in our East Tennessee communities, and we’re proud to be a part of their mission to serve others.

“We have been well aware of the organization for many years, and when she approached us at the kick-off of the Capital Campaign, we were more than happy to donate,” he added.

“I never cease to be amazed by the support we receive from the East Tennessee community and organizations like SouthEast Bank,” Petr said. “We know that this capital campaign will enable us to continue growing our efforts and serving our participants in a meaningful way.”

Petr says STAR will use funds raised during its capital campaign to expand behavioral and mental health programming at the South Knox site.

“The South Knoxville location was presented as a gift, but it is not ADA compliant and its arena is not enclosed, so as of right now we are not able to use it during our winter programs,” she said.