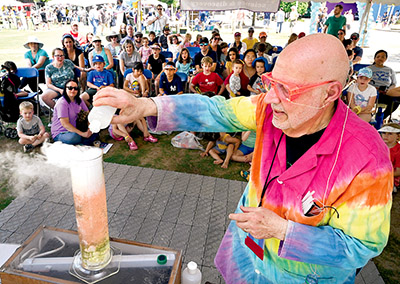 For the past 20 years, retired University of Tennessee chemistry professor, Dr. Al Hazari, has been entertaining — while educating — children of all ages with science in Knox County Public Libraries. His local science outreach has lasted more than 30 years.

Hazari, co-owner of Postal Annex with wife, Marcelle, in Cedar Bluff, is bringing the wonder of science with a “chemistry magic show” to county library branches now through June 30.

“It may look like magic, but we know they are actually science,” Hazari said. “Basically, I share simple science activities with anybody. The audience could be toddlers all the way to grandparents.

”You want to improve the science literacy of the public,” he added. “I do it in such a way that I always connect everyday life activities with science.”

For example, when Hazari talks about density, he shows, in the kitchen, how oil and water do not mix in a salad dressing.

“That’s something they can connect to,” he said. “It’s not totally out of context or experience … I connect science with daily stuff so they say, ‘Ah, this is science.’

“At the end of the presentation, everyone walks away with a little booklet that has some science activities the parents, the grandparents or siblings can do with the kiddies. Everybody learns and has fun.”

There were no presentations for the past couple of years because of COVID, but he said the Harriman Public Library did have some shows the past two summers.

“I actually branch out to other communities,” Hazari said.

He started with the library summer presentations 20 years ago when he was asked by the library system to do them after learning about him from schools and a reading festival, which Knox County Libraries hosts every year at the downtown World’s Fair Park, where Hazari usually does two to three presentations.

“The public library’s summer reading program starts in May at the festival,” Hazari said. Then, Hazari visits libraries with his science magic shows.

“I love the ones that are close, but I also love the ones farther away … you go all the way to Mascot, for example, or Coryton,” he added. “You don’t see much action in the libraries there. It’s not just in the city of Knoxville, it goes beyond.”

While Hazari retired seven years ago from UT, he had been a chemistry professor for 45 years. Prior to UT, he was at the University of Mississippi in Oxford, Mississippi.

“I came to UT in 1991 to teach chemistry, and that is the same year I started my science outreach program to the community, to the schools,” he said. “I have been working, over the years, with teachers, students, Boy Scouts, Girl Scouts, public libraries, The Muse, the American Museum of Science and Energy in Oak Ridge, and I go to assisted living centers to do some science programs for the elderly.

“They enjoy themselves,” Hazari added about the seniors. “They have fun with some simple activities.”

Hazari also does science birthdays. ”I can do anybody’s birthday,” he said. “Most of my demonstrations do not require elaborate equipment or chemicals. (The experiments) can be duplicated at home with some simple grocery store-type substances.”