On cutting edge of design 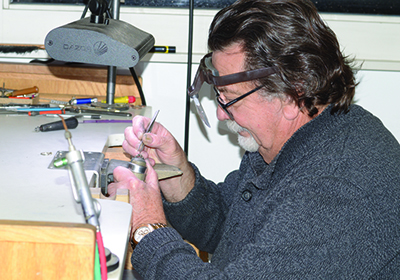 On the cutting edge of jewelry design, Rick Terry Jewelry Designs (11322 Kingston Pike) recently completed a remodel of its behind-the-scenes back room to complement its state-of-the-art technology.

“Our technologies have just really jumped off the page,” biz president Rick Terry said. “We’ve continually added pieces of equipment to make us more efficient, get a higher quality of work.

“That has really been a feather in our cap to be able to do it and have the tools that we have,” he added.

The family-owned and operated store, where Terry and his jewelers design, sell and repair jewelry, has been in business in the Knoxville area since 1986. They completely remodeled the Farragut showroom three years ago, providing an elegant space for their customers to browse, shop and meet with designers.

Terry — who works alongside his sons, Blake and Matt Terry — said they completed the remodeled workshop portion of the business a couple months ago.

While still working within its existing space, “we had to re-arrange everything,” Rick Terry said. “We had to gut some of the kitchen — we still have a kitchen, it’s just not as big as it was. We’ve got a cleaner, better look.

“We’ve got a lot of work stations for these (seven staff) girls so they can sit at the computer,” he added. “We use a point-of-sale software, The Edge; it helps run the jewelry store. It helps track everything that’s happening.”

The workstations include the computers, hard drives and other equipment to “do whatever their role is here,” the elder Terry said. “They have more of a role than most salespeople. They don’t just answer the phones, they don’t just wait on the customer in the showroom, they have jobs in the store.”

The back shop also houses technology not often found in a jewelry store.

“The 3D printer world has really been good for us because we’ve always had what is called, ‘lost wax casting,’” Rick Terry said.

“To make a piece of jewelry, you need to make a wax. It’s a very old process, been around a very long time, had a lot of people do it.”

Terry likened the 3D printer process to Winterfest, where the artist creates a swan out of a big block of ice.

“I am the only retail jewelry store in the Southeast that we know of, as of right now, that has that machine,” Rick Terry added.

“It prints a material (with which) we can go to the oven — the kiln — and burn it out, just like wax from the milling machine,” he said.

“So, we’re going straight from the 3D printer to the casting operation,” Rick Terry added.

“That’s new for us. The acrylic polymer plastic material doesn’t burn. You can’t burn it out like wax. This material this printer prints, we can cast it.

“So, we’ve moved into that realm, now, where we do that right in house.”

About his sons and staff, “I’m so proud of Blake and Matt and their growth, and so proud of my girls who work here,” Rick Terry said.

“We have a wonderful reputation, and we’re so proud of it.”

For more information about the business, call 865-777-3793 or visit its website at rickterryjewelry.com